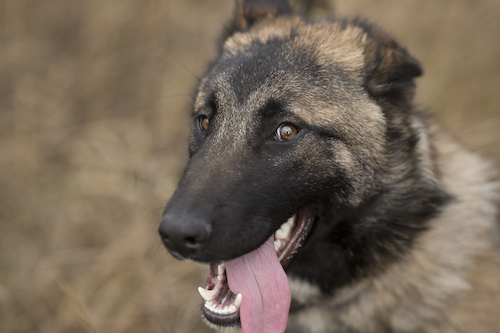 In 15 years of being a vet, I have only ever seen four cases of choking, three of the tennis balls and one of the foodstuffs that got stuck down the oesophagus of a working dog. Three of them, I have managed to clear. Sadly, one of them the tennis ball was so blocked that the dog, unfortunately, passed away before we were able to remove that obstruction. The problem in a lot of these cases is that they happen when an animal is out and if it is a large dog, transporting the animal to the vet is going to take time and that is the time that people do not have. So I think if it is a true choking incident, it is worth trying to clear that yourself at the site, because by the time you get to the vets, it may be too late. And the way you would try and do that is by forcing air up into the dog’s chest and trying to push that air to clear the obstruction.

Normally, that would be through doing abdominal thrusts, which we can show you how to do. A lot of cases do not require any assistance at all, because, after some efforts in certain dogs, they will be able to clear that obstruction themselves. They are very good at doing that, very good at clearing their throats and that is why I think we have only ever seen four in such a long history there. If you know that there is a chance that the size of the ball that you have bought could cause an obstruction in your dog, do not use it. Do not give that ball or that toy to your dog. That is the only way you can prevent choking on these things. And as I have said, three of the four incidents I have seen have been through tennis balls or toy balls, so if you think it could cause an obstruction, do not use it.