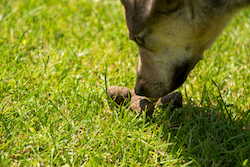 Some animals will come in to see us because they will have been eating their own or other dogs’ faeces. This is called coprophagia and it can be quite common in young animals. It is normally because they are quite curious and just trying out whatever is out there. It can be an indication of illness or disease, though, so if your dog has always been one of those dogs that will pick up other dogs’ faeces, other dogs’ motions when they are out and it is normal for them, it may still be worth looking into because it can be an indication that they might be on the wrong type of diet for them and they are craving nutrients that they are not getting in their own food, or it may be that that is just something that they do. But with some animals, where they have not always been eating other dogs’ faeces and they suddenly start to, then this can be an indication that their gut flora has changed, or the way they are digesting food has changed and that there is something going on elsewhere in their body, a liver issue, a kidney issue, that means that they are not digesting their food properly and not absorbing the same nutrients that they should be and are then craving the nutrients that they are getting from faeces.

If your dog is one of these dogs that goes out and eats faeces, it is worth mentioning to your vet. If it is a behavioural issue, then you need to look at the behavioural roots just to stop them from doing that. And the thing that I always suggest is to try and work on their recall, so that if you know they are headed out to go and eat it, then make sure that you have the ability to get them back with something that they would prefer. This will be quite difficult with some dogs, because that is the thing that they like to do most, but it is often possible, if you find a right toy or a right treat that they would prefer over eating the faeces and have that with you, and then try and recall them to then get them to come back for that particular thing they like. You will probably be able to manage it that way. The other thing is, with some dogs, carrying something in their mouth will stop them from then going to look for the faeces to eat. And that might be that they are going to carry a ball, or a frisbee, or a toy that they like from home, and that could be a way of managing the problem.

If you have a dog where this is not a normal thing for them to do, then we need to start looking down the route of why they are doing it, but also, if it is because of an underlying issue, you may find that their own faeces have changed, or their appetite has changed, or their weight has changed, and something just is not quite right with them, so it is worth noting when they do it. Is it after they have eaten? Is it after they vomited and then they are craving some food again? And after they have eaten the faeces, do they then vomit? Just knowing what is different and why they may have started eating those faeces will help work out which route to take as to diagnose why they may be doing it.