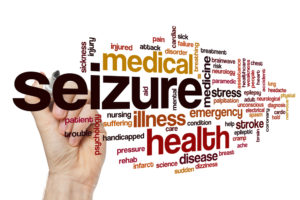 Seizures are one thing that is upsetting to see is a pet having a seizure. Treatment for a pet in seizure is the same as treatment for humans. You need to safeguard them from harm during the seizure and reassure them. If it is the first time the pet has had a seizure or if you think they may have been harmed during the seizure, get the advice of a vet immediately.

It is best to call the vet first as it may not be best practice to move them after a seizure. An animal with known seizures may sometimes not need Veterinary care if they are not injured.

A seizure is the physical manifestation of abnormal electrical activity in the brain. Pets having seizures is similar to humans with seizures and the care is basically the same.

There are many different types of seizures, but here we will focus on generalised tonic-clonic, or “grand mal” seizures. During a tonic-clonic seizure, your pet will lose consciousness and then frequently become stiff, or tonic, for a brief time, followed by repetitive jerking, or clonic, movements.

Dogs and cats will often also have a lot of jaw movement in a “biting” motion. Some pets will urinate or defecate during a seizure. There are many variations from this typical seizure, but they often last for about 1 to 2 minutes and are followed by a “postictal” phase, in which your pet may not be quite herself. You may notice that they are lethargic, “glassy-eyed,” uncoordinated and unsteady. Some pets lose vision temporarily. This phase can last for several minutes to a couple of hours.

Keeping your pet safe during a seizure involves minimising ways for them to injure themselves. NEVER put your hand in or around a seizing animal’s mouth, but you should prevent them from falling off of furniture or downstairs if they happen to be nearby when your animal starts to have a seizure.

Although it can be difficult to remain calm, try to note the times that the different stages of the seizure occur. Video can be very useful for the vet but only if other care is not compromised.

Tonic-clonic seizure activity lasting longer than 5 minutes is a serious medical emergency, but most seizures will stop on their own within a minute or two.

Cluster seizures, where two or more seizures within a 24 hour period, also warrant immediate veterinary care. Prolonged seizure activity can lead to overheating and possible heat stroke as well. If you do not have veterinary care available, a continuously seizing animal may need to be cooled off with water and fans or air conditioning before transport to keep her temperature below 40-degree Celcius.

Seizures may sometimes be confused with other collapse events, usually fainting or “syn-co-pe.” Syn-co-pe is a sudden drop in blood flow to the brain, that causes collapse and loss of consciousness and is usually caused by an underlying heart disease, often an arrhythmia.

Syn-co-pe can also be caused by a neurologic disorder and may actually be a seizure. If your pet starts to recover but doesn’t seem to be quite himself for short while, this could be a seizure. If these episodes happen more than once, attempting to get a video of the episode is often helpful. Taking your pet’s vitals a during or just after an event is also helpful. Either way, your pet needs to be examined by a veterinarian as soon as possible

When a dog or cat develops epilepsy, it is useful to note exactly what happens. This will enable you to describe the seizure accurately to the vet. It is possible that it might be a heart attack and not a fit and the vet will need this info to correctly offer the best treatment.

A typical fit involves intense shaking/jerking, sometimes frothing of saliva and ‘paddling’ of limbs along with the loss of some normal body control (so they may urinate unintentionally).

They may stop breathing for a short period of time but this is something that will pass very quickly.

Initial first aid is to prevent them from harm but otherwise leave them well alone to come round. This can take a few minutes and the pet can be dopey for some time after. It is particularly helpful to not touch them and switch off lights, noise, leave them be but monitor the situation.

If the seizure is for the first time, phone your vet as they may advise bringing them in the next day as the animal needs to rest and a trip to the vet may be too stressful.

All fits should be recorded and discussed with the vet and there is the risk of repeated fits and the concern of ‘status epilepticus’ developing. However, many animals with epilepsy have their condition controlled well with medication and lead otherwise normal lives.