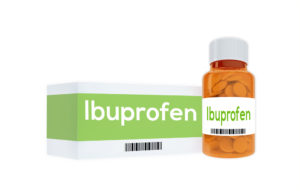 Ibuprofen and pets do not mix. Ibuprofen is a painkiller that is available over the counter without a prescription. It’s one of a group of painkillers called non-steroidal anti-inflammatory drugs (NSAIDs). It is a popular painkiller used in households and prescribed by doctors for pain relief.

Although generally harmless in humans it can be fatal to pets.

Pets can get hold of ibuprofen by accidentally eating them were left out, dropping a tablet, which is later found by a pet or by giving them to pets thinking they are ok.

Reduced blood flow to the kidneys results in kidney damage. Reduced platelet aggregation leads to an increased tendency to bleed abnormally. As the kidneys are damaged other symptoms can show like Increased thirst with Increased urination and Decreased or lack of urine volume.

Other signs are lack of appetite and weight loss, seizures, in-coordination, which can lead to coma and death.

If you suspect or know an animal has consumed Ibuprofen, your vet needs to be given the full medical history and they will usually take blood and urine tests to assess any kidney damage and gastrointestinal, renal and neurological signs associated with ibuprofen poisoning in a dog.

The treatment will depend on the amounts and times of consumption.

If ingestion has recently occurred, symptoms may not be present. A vet may advice inducing vomiting to remove the tablets from the stomach quickly.

Activated charcoal may be used to absorb the ibuprofen poison in the stomach.

When the kidneys have become damaged, fluid therapy and blood or plasma transfusions will be required.

Vomiting is controlled by the vet using medications and they may use drugs such as gastrointestinal protectants. Gastric perforation will require surgical correction and if seizures occur, anticonvulsant medications may be necessary.

Prevention is simply to keep all medications safety away from animals.