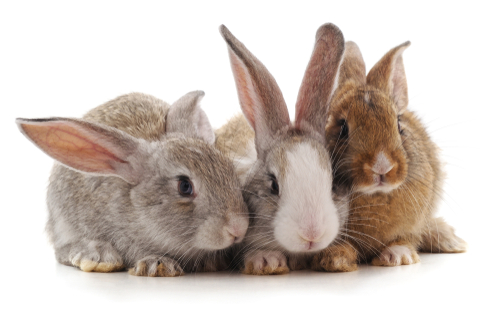 Pet first aid for our smaller pets, such as rabbits, guinea pigs, hamsters, is essentially the same as it would be for dogs and cats, however, they are a lot smaller and so for bandage situations, it may not be possible to put on a bandage on a little leg of a hamster. I think the biggest difference between the small pets, compared to the larger dogs and cats, is the fact that they can go into shock a lot quicker and the reason for this is that their surface area to volume ratio is a lot larger, so they have a lot bigger surface area for their size. So, they can get colder quicker, they can get blood loss and if the blood loss is considerable, it will affect them a lot quicker than it would for a cat or a dog. So, in these situations, if you know, if you have seen an injury, or you have a wound on a small pet, on a rabbit, keep it clean, but look at keeping your animal warm and trying to prevent them from going into shock from the injury they have and get them to the vet as soon as you can.

Although the first aid for the small pets may be quite similar as it is for the dogs and cats, the smaller pets can be more susceptible to certain conditions. So, for example, the parasites that can affect them are the same as they can for dogs and cats. They can get fleas, but with rabbits, in particular, fleas are quite a big concern because they can transmit something called Myxomatosis. Myxomatosis is a really horrible virus that rabbits get and can cause lots of different symptoms. They get a lot of discharge; nasal discharge, discharge from their eyes, they get swollen genitalia, that’s a very common symptom of the Myxomatosis and sadly, with rabbits that do contract the Myxomatosis, treatment is often unrewarding and they do, unfortunately, get put to sleep.

The other thing that rabbits get are two conditions that we can vaccinate against. One of them is the Myxomatosis and the other condition is something called viral haemorrhagic diarrhoea. So, with these rabbits, the vaccination will protect them against that, however, there was a newer strain of the haemorrhagic diarrhoea virus that has started to affect rabbits and this one does not actually cause haemorrhagic diarrhoea in a lot of the cases. It goes and attacks the organs and it causes sudden death in a lot of rabbits. So, this is a vaccine that has recently come out in the last two years and we are now trying to encourage rabbit owners to vaccinate against this, as well, because it’s not… If they do contract that virus, we know that we will not be able to do anything about it. So, other diseases that we see more frequently in the smaller pets would be respiratory diseases and also skin diseases. The thing with the respiratory disease is because their lung capacity is lower than it is in dogs and cats, they can become unwell a lot quicker and the disease can go a lot further before they come in to see us at the vet. Often we find that treatment is started too late and, sadly, we can not bring them back from having those respiratory diseases.