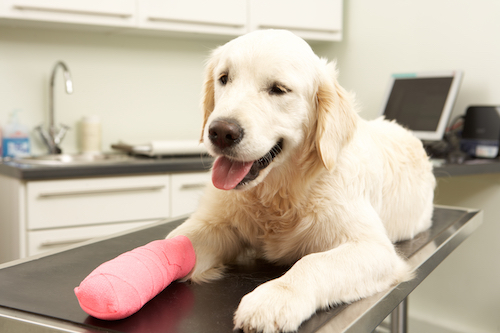 There were many cases where a dog or cat will leave the practice with a bandage on. With any bandage, we don’t leave them on for longer than two or three days maximum. The reason for that is because if something is bandaged, the wound is bandaged, we can’t see underneath that bandage what’s happening. And if you leave it longer than that, if something has happened, by the time you find out about it, then it can be too late. And what we’re thinking of mainly is infection or breakdown of a wound that needs treatment sooner than the time that maybe if you left the bandage on for too long. When an animal walks out with a bandage, we always advise owners to look out for several things. The first one, we want to make sure that bandage is comfortable for the dog or the cat. Initially, they always have a little shake or they might not put their foot down because it feels a bit funny. The bandage is all very lightweight, but it is a slight extra weight for the foot. So it takes them a little while to get used to it. If after a couple of hours, your dog is not used to that bandage, it may be that the bandage is in an uncomfortable place and it’s causing pain or it’s too tight. And in those situations, always take your dog or cat back to the vet’s, and they can take the bandage off or just check it and make sure they are happy with it.

You also want to be checking for any swelling above or below where the bandage is. In a lot of cases on feet, the foot will be included, or the leg, the foot will be included in the bandage. So you are mainly looking for swelling above where the bandage is. The other important thing is that that bandage needs to stay dry. So when you take your dog out, you would put a waterproof cover over. If that waterproof cover is a plastic bag, you don’t want to be leaving that plastic on for very long because plastic isn’t breathable. So the bandage could become quite sweaty and wet underneath there. So just take it off when you come back from your walk, check the bandage again. You wanna be checking that that bandage is dry. If you have been out and it’s been wet, this potentially could still get wet through that bag. If it is wet at all, phone your vet, let them know. If you can’t get into the vet’s immediately they might, depending on what it sounds like, how wet it is, they might suggest that you take that bandage off because you do not want loads of moisture getting into the wounds that that bandage is covering.

The other thing to look out for is any smell around the bandage. So if there’s anything abnormal, any smell that you don’t like about that bandage, again, phone your vet or take them to the vet’s and they can check it. It may be that there is an infection that’s starting in there and that’s what you can smell, so it’s really important to get on top of that before the infection takes hold and potentially the wound would break down and you’re back where you started. So, bandage aftercare, any worries about what that bandage looks like, smells like, feels like for your dog, if he’s showing any sort of pain with that bandage on, phone your vet, let them know and they can give you some advice.