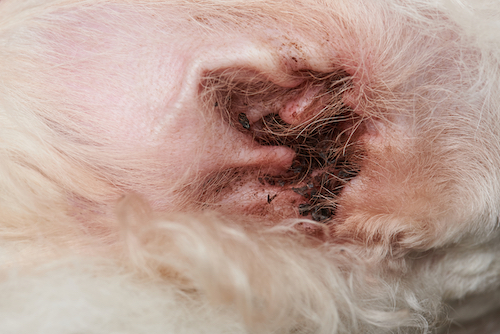 Vets find a lot of animals come in with ear problems, it is quite a common problem. They will often come in, initially, head-shaking or scratching at their ear. With dogs, they love to rub their ears along carpets as well. And the owner will come in, not necessarily saying that it is an ear problem, but telling me that those things are happening, they are shaking their head. Not always an ear problem, but most of the time, it is. So the most common things are ear infections. At different times of the year, we get different issues. So, if your dog does a lot of swimming, then you can get water in your ears, that can then lead on to infections. Infection, they just love ears, bacteria love ears because it is not a very open space. Dog ear canals are very long and very narrow and there is not a lot of oxygen there, so the bacteria just breed and breed. And within a couple of days, you can have quite a bad ear infection there that is really painful for that dog. What we normally do is try and look in the better ear first, if there is one. Often, if it is as a result of swimming or something like that, then it will be both ears affected. They do not like you looking in their ears, but it is normally done.

The other thing that we commonly have in the summer are grass seeds. So, most dogs will, at some point in their weekly walks, go through a long field of grass. And they do have these really sharp long grass seeds that will go down an ear, they can get into other parts of the body as well, but probably most of them get into ears. Again, because of the length of the ear canal, it is not something the owner can see, not something that they can remove, but they will go right down to the base of the eardrum. We can normally see them when they come into the vets, and they just need removing.

The other things that you can get would be ear tumours. They are not common at all, but when they happen, they are normally quite aggressive and quite nasty. You can get congenital ear problems, where the ear canals have not formed properly during growth in the uterus. They would often require surgery to either ablate, which is taking out the ear canal completely, or open up an ear canal if that is possible. So, the other thing that an owner may notice, even if they do not notice the scratching or the head rubbing, would be a smell in the ear. They are quite specific smells depending on what the infection is, but yeast infections and bacterial infections can smell quite potent and that will be the first thing that gets picked up. And it also helps us if an owner is phoning to make an appointment and tells us about those smells, then we know in advance that that is probably what we are dealing with and it helps us prepare better for the consultation.

So, we do see a lot of injuries to pets’ ears, probably shared equally between dogs and cats. With the cats, we tend to find it is from cat fights. So, if a cat is head-on fighting, it will often be the ears that get the tear or the wound to them. Ears would always bleed a lot because they have lots of different capillaries in the skin layer, so it always looks really bad when it happens. They will often get infected if they are not treated promptly after the injury has occurred. In dogs, it does not tend to be from fighting. It can be from fighting, but it is normally when they have been running through bushes on a walk, occasionally, it can be because they have jumped through something sharp like a pane of glass. We did have one that had jumped through a car window and cut all of its head, including its ears and a lot of lacerations to the ear that needed suturing back up again. But the ones that happened out on walks, they sometimes do not get noticed because they will be quite superficial and shallow cuts to the ear. And it is only when you get home that you notice that there is a spot of blood, or you can feel the congealed blood on the ear flap, that you then look and find that the cut is there. They do not tend to be quite as serious as the ones that are proper lacerations rather than just the cuts.