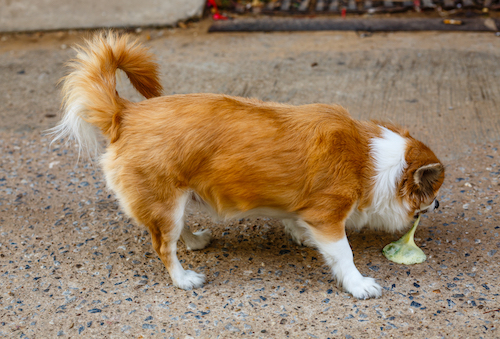 Like humans, you will get times when your pet will vomit. If it is a one-off and they have just maybe brought back their dinner after they have eaten it, and they otherwise seem absolutely fine, then you do not really need to be that concerned about it. If you notice that your pet has vomited and the vomit that they have brought up is concerning to you, so if it is not just food, if there is something in it, if there is blood in it, if there is anything that looks like coffee granules, which would be digested blood, then that is a concern and it is something that you should take your pet to be seen by your vet.

A really good thing to do that seems a little bit strange at the time, but take a photo of that vomit so that you can show it to your vet. Measure or monitor the frequency with which they vomit. So, some animals are brought in because they vomit once a week. And maybe that is completely normal for them, they just overeat once a week and they bring up their food, get checked over, probably not a concern and we do not need to worry too much about it. Other animals that vomit once a week and do that thing, it may well be a concern, there may be some underlying pancreatic problem, there may be an underlying parasitic problem. If your cat is a hunter and not been wormed for several months, the chances are that they are doing that because they have worm larvae in their upper gastrointestinal tract that is making them vomit. It is always worth checking out if your pet is vomiting more than once, then just get them checked out, take the photos, monitor the frequency with which they vomit and report that back to your vet as well.

If there is any pain associated with vomits, again, that is important and the vet needs to know that because it can help them diagnose why they may be vomiting. In a lot of cases of pancreatitis, for example, in dogs, they get a lot of upper abdominal, cranial abdominal pain. And when they vomit, that tends to be worse. So if you have got that and the vet knows that, then they know they should be looking for pancreatic issues. So anything that goes along with that vomiting, anything else that it does, any other thing else that your pet does, make sure you relay that information to your vet when you come and see them.

So I think in a lot of cases when your dog or cat vomits, you may not be around. And it might be the case that they have re-ingested it after they have vomited it back up again. The only way you are going to tell that is if there is a sign, you have a little bit of vomit on the floor that looks like it has probably been re-eaten. If there is anything in that vomit that is not just food and you see that happen, you need to stop them from re-ingesting it if you can, or them re-ingesting it, or any other dog, because that is the other thing, any dog or cat around will want to know what it is, have a sniff, and probably have a taste as well. So you want to make sure they are not re-eating their vomit. If they do just vomit the once and they seem well, the best bet is not to feed them for a few hours, because if they vomited, the chances are if you give them something quite soon after, they will just vomit it back up again, because they are still quite sensitive and anything that lands in the stomach is probably going to come back up again.

So we would normally advise rest, gut rest for 12 hours, but you must make sure that they continue to drink. If an animal at any point cannot keep water down, they will become dehydrated and that is when they become really unwell. So if that is the case and they are vomiting up water after they drank it, then you should take them to a vet.