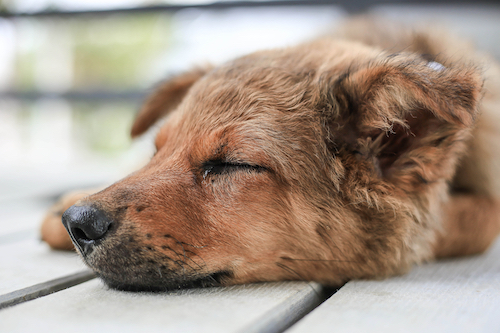 Very similar to many of the other conditions you will get in dogs and cats, you will get infections, you will get irritations, inflammations or tumours of any system. The same applies to the nose. So, the first thing that we look for as a trauma, so either a grass seed, for example, that has gone up a nostril. Children and dogs, often you will find that they will try and push things up dogs’ noses as they would their own noses. So, foreign bodies that could cause irritation or inflammation, that is something that we do find. Then you have an infection of the nostrils, of the upper respiratory tract, which would be the nose and throat area as well. We will find discharge in a lot of those cases. And that may be that the discharge is running out of the nose or it might be that it is apparent when they sneeze or when they cough that you will see something come up. Again, smell, like with mouths, eyes, ears, the smell is really important. And if you are smelling something around their nose that is not right, then that is an indication that there is probably an infection or something there that needs to be looked at.

With tumours of the nose, they are not always obvious, initially, because they can grow inside the nose. They can be quite invasive, so what will happen eventually, is they go through the nasal turbinates and out through the nasal bone on the outside, and that is when the owner may have a clue that something is growing there. Prior to something being seen, you may see signs such as sneezing or an irritation, trying to clear their nose rather than a sneeze. And it might be worse after eating or drinking because whatever is growing there may not just be in the nose, it could be invading into the throat area as well. When you get past the throat, we are looking at the trachea and the chest, the lungs. Infection, again, is the most common thing. Pneumonia would be quite a severe infection that you could get. Mostly, an infection would advance on to pneumonia if it was not treated in time. The initial signs of a chest infection would be wheezing when breathing, coughing, the sneezing again. Potentially, you would see some breathing difficulties because of the inflammation in the chest that they would not be able to inflate their lungs properly, and so you would see an increased effort. And you might even see on a dog or a cat that they would breathe from their abdomen, so it would look like they are putting extra effort in from their abdomen.

That would be a sign that something is going wrong there, and could be an infection, could just be inflammation, in the case of something like asthma, or an allergy that they have inhaled, an allergen that they have inhaled that they are having a reaction to. Or again, the thing that we always have to consider, especially as animals get older, that we have to look at tumours of the chest as well.