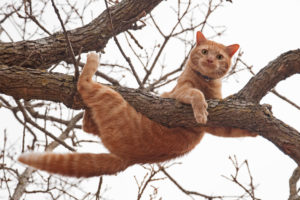 Falls from heights by cats have a much better outcome than falls by humans. Cats have a remarkable habit of surviving falls with only minor injuries, even those from high buildings. A cat in Boston once fell from a 19 story apartment window and survived, whilst another in New York fell 32 stories onto concrete and survived with nothing more than a chipped tooth and a collapsed lung. He was discharged from the vets within 48 hours. In fact, in 1987 a study in New York found that out of 132 cats brought into vets after falls from high rise buildings, 90% survived and only 37% needed emergency treatment to keep them alive.

So why are cats able to survive falls that would clearly kill a human? Cats have a high body surface area in proportion to their weight, which reduces the pressure on their bodies when they hit the ground. As such, cats reach what is known as terminal velocity much quicker than large animals or humans. This means that they fall slower and hit the ground with less force. A cat reaches a speed of 60 miles an hour with its legs extended whereas a human would reach speeds of up to 120 miles an hour.

Cats have what is called “cat aerial righting reflex” or “High-rise syndrome” which if they have enough time, allows them to sense they are falling and spin themselves around so their feet hit the ground first. As they fall, they also spread their legs which increases drag and slows their speed yet further. As they land on their legs they act as shock absorbers, breaking the fall, whereas a human would land and probably break their spine, if falling from an equivalent height. This reaction is something cats have evolved to help them as they fall from trees outdoors.
If a cat were to land with their legs straight they would break immediately and this force could be transferred to the spine or skull, instantly killing them. Instead, their legs have joints that can bend to the sides of their bodies when they fall, absorbing much of the impact.
It’s inevitable that some cats will injure and where they are overweight, their reactions may not be as good and this can result in broken legs, lung damage, a broken jaw and teeth, or fractures to many other bones including the tail. Thoracic or chest injuries are the most common cause of death in cats that fall from great heights.