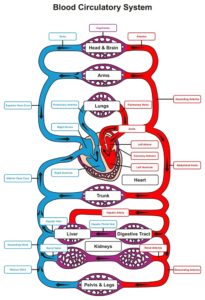 Circulatory system is divided into three parts, the blood, the heart and the blood vessels.

Blood is the transport medium by which nourishment and oxygen are carried to all the structures of the body and waste products and carbon dioxide are removed. Blood is composed of a number of cells suspended in a liquid medium called plasma. Blood consists of four components, red blood cells, white blood cells, platelets and plasma.

Blood contains approximately 242 to 270 million red blood cells in every drop of blood. These cells are produced in the soft red bone marrow. Red blood cells contain a protein called haemoglobin which binds to oxygen and allows red blood cells to carry oxygen in the blood and to a lesser extent carbon dioxide.

Haemoglobin is the pigment that gives red blood cells their colour and therefore blood, its red colour. Blood volume usually consists of about 40% red blood cells. White blood cells are called leukocytes and are transparent and unlike red blood cells, they do not contain any haemoglobin. They are fewer in number than red blood cells, about 700 times less. They are also produced in the red bone marrow. White blood cells come in many shapes and forms but are generally the cells of the immune system that fight infection. They destroy bacteria and other harmful living organisms thus protecting the body by removing diseased or injured tissue.

Platelets, unlike red and white blood cells which are whole cells, platelets are actually cell fragments. Platelets will assist in preventing blood loss from a damaged blood vessel by forming a platelet plug. They also release chemicals which will help to promote blood clotting this is the initial stage of repair to damaged tissues.

Plasma is the straw coloured liquid portion of the blood which consists predominantly of water. Plasma has approximately 91.5% water and 8.5% solutes which are proteins, electrolyte, nutrients, gases, hormones, enzymes vitamins and waste products.

The heart is, in essence, a muscular pump which pushes the oxygen and nutrients around the body to the tissues. In humans, it is about the size of a man’s clench fist. It aligns behind the sternum just left of centre.

Each side of the heart is hollow and is further broken down into smaller connected chambers. There are four chambers in total. Two upper chambers, the atrium and two lower chambers, called the ventricles.

The word atrium is the Latin for hall or entranceway and is the chamber which blood flows into first when entering either side of the heart. The atrium receives blood from the veins from different parts of the body and pump the blood down into the ventricles. The atrium is smaller than ventricles and they do not really have to contract particularly hard even if the atria fail to contract properly, most of the blood in the atria will flow into the ventricles passively.

The ventricles supply the force to push the blood to its various destinations. In a cardiogram display of the hearts function, it would be easily seen that the left ventricle has larger muscular walls than the right ventricle. This is because the left side pumps its contents to the furthest parts of the body, whereas the right side only has to pump its contents to the adjacent lungs.

There are a number of different valves around the heart all performing slightly different tasks.

The right-hand side of the heart is responsible for receiving blood from the upper and lower body via the veins, this is called venous return. The blood enters the right atrium by either the inferior or superior vena cava. The blood is saturated with carbon dioxide and is referred to as deoxygenated blood. It is injected into the lungs via the pulmonary artery.

Deoxygenated blood is dark red in colour but may appear bluish when viewed through blood vessel walls. It is normally coloured in blue when drawn pictures of the heart. In the pulmonary capillaries, carbon dioxide diffuses into the lungs to be expired while oxygen enters the blood.

This oxygenated blood bright red in colour enters the left atrial of the heart via the pulmonary vein. The left ventricle then ejects the blood and oxygen via the aorta to the tissues of the body into the systemic circulation. It is important to remember that arteries always carry blood away from the heart and veins always carry blood to the heart.

The blood vessels are able to narrow, vasoconstrict or widen, vasodilated, because of the smooth muscle found in their walls. As a result, more or less blood flows through them this enables the body to direct the flow of blood to different tissues depending on what state the body is in and where the oxygen and nutrients are required.

This also plays a part in the regulation of blood pressure. If food has just been eaten then the blood vessels that feed the digestive system are vasodilated and the blood flow is increased whilst blood vessels feeding muscles are vasoconstricted reducing the blood flow. This directs more blood to the stomach. If someone is in shock, this is why we do not give them food as we do not want valuable blood to be diverted to a non-critical part of the body.

During exercise the opposite happens, more blood will be rooted to the muscles and less will be available to the organs and the digestive tract. Eating a large meal too close to exercise will allow insufficient time for the food to be digested in the stomach causing cramps and sometimes vomiting.