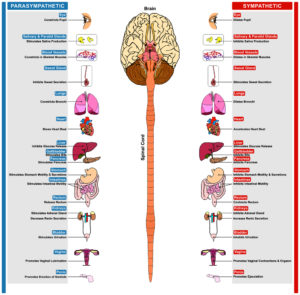 At its simplest level, the nervous system is a communications network which has three basic elements of, sensation, analysis and response.

The sensation is a vast array of sensors spread throughout the body which continually gathers information about both the internal environment such as blood and CO2 levels and the external environment, such as temperature.

Analysis sensory input represents the massive amount of information and is the second role of the nervous system. It needs to analyse and interpret information being received and decide on the appropriate response. Many of these decisions are automated and there is no voluntary control over the response. The appropriate response must be initiated either by muscle contraction or glandular secretion.

The central nervous system consists of the brain and spinal cord. The peripheral nerves are primarily responsible for the muscular action.

The spinal cord is composed of the cervical, thoracic, lumbar and sacral segments named accordingly to the portion of the vertebral column through which passes. The spinal cord is the communication link between the brain and the rest of the body. It integrates incoming information and produces responses via reflex mechanisms. If the spinal cord is damaged in an accident, all movement and function beyond that point can be affected.