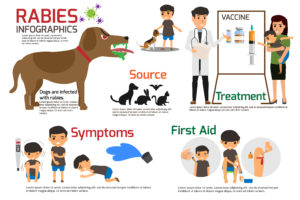 Rabies is not found in the UK, but it can be found in mainland Europe and further afield.  It is a fast-acting virus that affects the brain, spinal cord and central nervous system of humans, bats, foxes, cats and dogs. Rabies is a serious concern and it is estimated that about 50,000 people and millions of animals die of Rabies worldwide every year.  Once symptoms show, death usually occurs.

UK animals are only at risk if you travel with them abroad or you live outside the UK. If humans are bitten by an infected animal, they need to get immediate medical attention and if travelling with your pets they must legally have rabies vaccinations before travel and hold a valid pet passport, which will be checked at national borders.

The incubation period in dogs is usually between 14 to 60 days but in some cases, it can be much longer.

When a dog becomes infected you will initially notice that they have extreme behavioural changes, for example, they will become aggressive to other animals or inanimate objects, they become irritable, restless, dehydrated, they may constantly lick the injury site and they may also develop a fever. You may also notice a change in the tone of their bark and they often develop a fear of water.

Other things you may see are seizures, weakness and of course, eventual death.

If your dog is bitten and they are vaccinated, they will require a booster vaccination and other treatments from a vet which can include being monitored for 10 days in quarantine.

The first aid advice if you or your pet are bitten or scratched by a potentially infected animal whilst abroad is to immediately clean the wound with running water and soap for several minutes and disinfect the wound with alcohol or iodine-based disinfectant, and then to apply a dressing. Then take the animal to a vet or if on a human, go to a Doctor immediately. Do not delay professional help until you get back to the UK.

Considering humans and rabies, it generally takes between 2 and 8 weeks for signs and symptoms to show. This can vary depending on the age of the person and the amount of infectious material you are exposed to.  Although rare, it can be as short as 10 days but also it could take one or two years for signs to show.

Where possible, testing is usually done on the animal that caused the bite, to see if they have been exposed to rabies. Blood tests can be carried out, but these are not that successful until the virus becomes more advanced and antibodies are produced. Rabies is usually fatal once symptoms show, so treatment usually starts as soon as the risk is established. Treatment is also given in the form of vaccination injections to try and fight the virus.

Finally, if you are entering a high-risk environment, you can have rabies vaccinations injections to give some protection if you are bitten. For more information, contact your Doctor who will be able to advise you further.  There is usually a charge for the vaccinations. Even once you have had the vaccination, obviously do what you can to avoid getting bitten or scratched by animals when travelling.